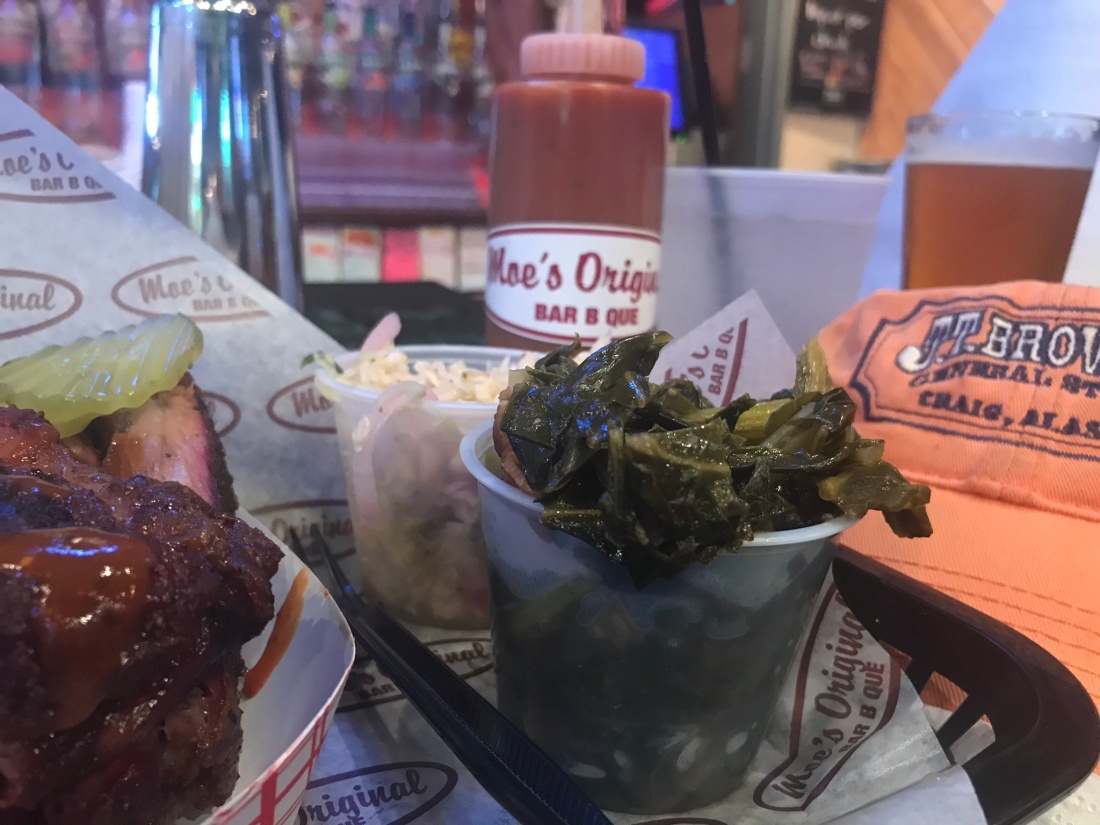 The drive from Tennessee to Tuscaloosa put me on the little roads along the Tennessee River and the lake country of northern Alabama. I had an entirely different image of Alabama in my mind, and this was beautiful and fun to drive through. Tuscaloosa is the home of Alabama University, and I stayed in the heart of the entertainment district just off campus. I shopped a couple of the consignment/resale stores and found a good Brooks Brothers blazer for $15. There was lots of good stuff there, but there was no need to pack the closet. I ate at Moe’s Barbeque, which seemed to specialize in college boy quantity over quality, and then on to a craft brewery, the Black Warrior. There were a few people about my age who worked at the University sitting at the bar, and we had a good conversation over passable beer.

I continued down the row, and found some live music, a cover band doing alternative music quite pleasantly, if not with inspiration. The bartender was a 20-something woman who was drugged out of her mind, barely standing up and having a hard time keeping up with a slow paced bar crowd. I was the oldest person in the bar by decades, and was adopted as a mascot by a couple of college girls who were apparently talking to me to avoid talking to the boys they were with. I was happy to oblige. Apparently the angst of “I’m about to graduate and have no idea what to do” hasn’t changed much since 1984. It was quite a change from the crowd at the Palace, and a welcome one, if not a place I will be coming back to every day.

The drive to Biloxi was through rice farms and bayou, with some beautiful old backwoods homes on the water tucked in among the trees. The roads were lined for miles with overhanging trees and Spanish moss, which made for a beautiful drive. The bayou country opened up right on Biloxi Bay, and the ocean was a welcome sight after months away from Alaska where we tend to take it for granted. I booked a hotel room right at the edge of the casino district, and it reminded me unsurprisingly of Vegas, except it was right across the street from the Gulf and a beautiful section of beach. It was warm and breezy, but the wind off the water and blowing sand made it not a beach day.

There were four or more casinos right next to each other, and designed so it would be hard to get from one to the other walking. I did walk through the old section of Biloxi-it looked like one block out of a quieter section of the quarter, but the street names seemed right-Iberville, Bienville, etc. Northwestern was playing in the Big Ten Championship, so I put some money down and watched the game in the sport book, breaking even at video blackjack and losing money on the fan bet. It was a good experience with yet an entirely different crowd of people, but I am fairly certain that I will not be booking a casino vacation soon.

The drive from Biloxi back to New Orleans was amazing, and the Mississippi Gulf Coast is a beautiful as advertised. I was there in the off season, so it seemed like it was reasonably uncrowded. The beach is long, like 25 or 30 miles, and there are several communities along the way. There were beautiful houses along the bay, many on stilts to let high water pass under, and long sections of the road were lined with weathered live oaks. The Biloxi/Gulf Shores end seemed the most developed with casinos and resorts, and the Pass Christian and Bay St. Charles end seeming very much like the rural waterfront I am used to, with lots of people with small boats and folks selling seafood out of coolers in the back of their trucks. The smaller towns and the west end of the beach are about 45 minutes from our house in New Orleans, so will make for good day trips when the fancy strikes.

I was driving a Ford Fusion hybrid with all the bells and whistles. It was a great car to drive, and got about 40 miles per gallon. This is the first “fly by wire” car I have ever driven, with a button or on screen control to do everything. I would be reluctant to buy one because I have no idea how it works, but might be persuaded because of the convenience and eco-friendly aspects. On this trip, everything worked and it was great, especially the Apple CarPlay which made music and navigation easy. I didn’t have to channel surf through the angry talk radio of middle America, and used the no-highways filter on Google maps to find some fun routes without ever being concerned about being lost while not really knowing where I was for a good part of the time-north of Birmingham headed southwest was good enough, even if it was a county road with no paint or shoulders. It was worth the extra hour or two of travel time to be on entertaining roads without fast-food restaurants or other vestiges of suburbia. There were lots of churches and dollar stores, but I didn’t have to hang out in either. I recommend it if you have the time and enjoy breaking out of the bubble.

I didn’t plan the BBQ portion of the trip well enough, but was able to see a little live music and get a taste of the backroads. I did not take enough photos, finding my attention consumed by driving, and perhaps would have preferred to be in my little red car, but all in all it was a great trip. Now to prep for Christmas/New Year’s in NOLA!