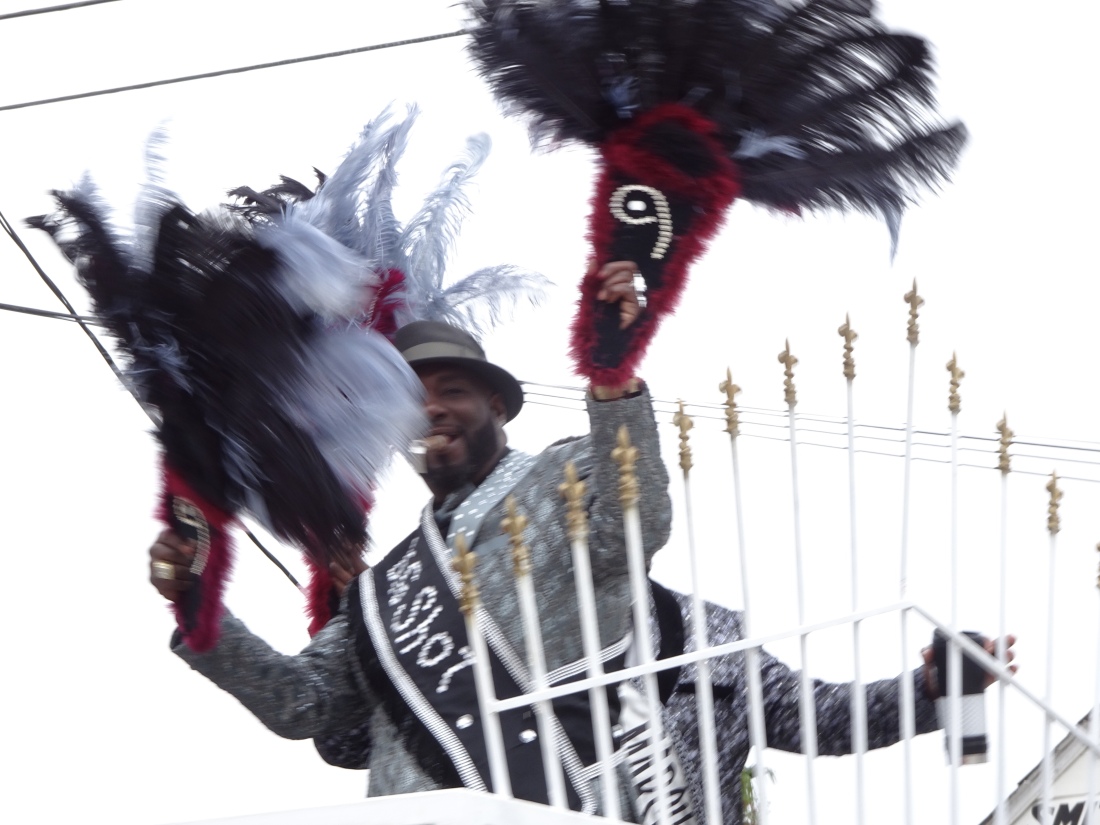 It was a good day. I beat the brunch crowd to Envie, and had a good hour of plunking away at the keyboard. I ran to Walgreens, fighting the different ways to think about organizing personal grooming products. I’m convinced I don’t have a career in retail.

I did time it right to catch the second line coming down St. Claude/Rampart. This was the first “official” second line I have run into. Sundays the social aid and pleasure clubs from the black neighborhoods march, one per Sunday all year long, following different routes depending on where they are and their history. These groups were founded during Reconstruction as a kind of insurance system, paying for funerals and helping members in need. They are roughly analogous to the Knights of Columbus or the Grange or the Bund or other semi-religious ethnically oriented groups of the same time.

In any case, this was a group from the 9th Ward, marching from the Treme to the Lower 9th. There was a heavy police escort, and three main floats, one for men, one for women, and one for youngsters. People on the floats were dressed up in fancy suits and dresses and were carrying feathered emblems of their group. These were trucks playing recorded music, and they were followed by a marching brass band and a throng of dancer/steppers just following along. There were informal vendors pulling coolers on wheels selling beer and water, with the water on top so the police who looked over could plausibly ignore them. I watched the party go by, and took a couple of photos. I’m thinking Big Shot Eddie has it going on.

It was a football Sunday, and I wanted to catch parts of the Bears/Packers game and the Seahawks game. I wandered down to Buffa’s and followed the Bears game on my phone as the local TV only had the Dallas game on. It was moderately fun to see the Cowboys be humiliated but it would have been more fun to see the Bears play. The season is looking good for the Saints, Bears, and a little less so for the Seahawks. I think we have to keep the mojo working.

I walked through the Quarter with the ostensible plan of going to the liquor store so I didn’t pay convenience store prices, and walked by Fritzel’s. A ragtime piano player was playing, and there was a a seat at the bar. Rarely is there both music playing and a seat available at Fritzel’s. After a few songs, I went over to the Hole in the Wall to watch a little football, and ran into Susie in her Santa suit. She had been doing a fundraiser for a dog rescue group by taking pet photos with Santa. All of this knocked my plans to go to the grocery store off target, and I ended up at Buffa’s where I had a carrot croquette. This is a potato/carrot cake smothered in an excellent seafood sauce. It is a definite step above your average dive bar food, and worth a repeat.

I made it to the grocery store, running into Chris outside Iggies in the early afternoon. I spent an hour with a machete attacking the banana tree in the back, filling a couple of garbage cans with tree, and re-attaching the tarp to the back fence.

I walked along Royal Street looking for Christmas ideas, stopping in the Antieau gallery and window shopping a few more. I found a fun gift in the Dirty Coast shop, and ended up at jack White’s for Susie’s chili, continuing the Monday red beans tradition. I watched the first half of the Saints game there, and walked during half time across the Quarter to Buffa’s. The game was an odd low-scoring affair, with neither team able to get much going, but the Saints pulled it out despite lots of penalties and sloppy play. There were several of the neighborhood regulars and I was joined at the bar by a guy named Hastings for a disturbing conversation. He might be the first mobster I have run into in New Orleans. A weird end to a pretty good day.