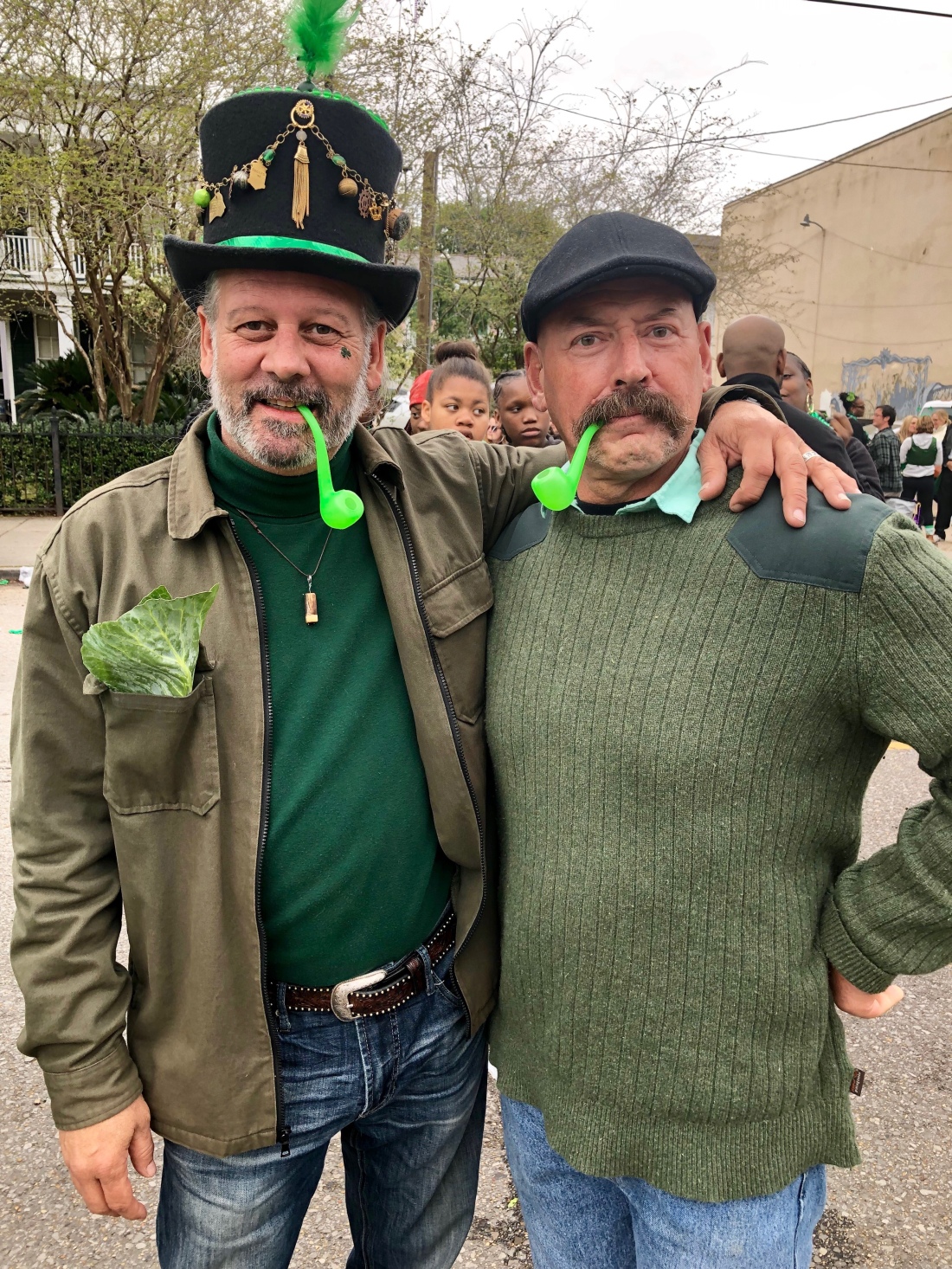 The weekend started rainy and cool, in the 50s, and I was feeling the after effects of square yards of tattooing. My skin was hot to the touch, and I just did not have the energy to head out on the streets in the rain even for one of my favorite walking parades, the Jim Monahan memorial on Friday, or even a set of music. I did read a couple hundred pages of the Plessy history, for a half-hearted stab at productivity.

On Saturday, I was invited to be a guinea pig for Susie’s literature tour. She did a dress rehearsal of the walking tour she is preparing for the upcoming Tennessee Williams festival for a group of friends. It was an interesting way to see what a tour guide does. We started at the Monteleone and looped through the Quarter, with Susie pointing out a half dozen or so places and telling anecdotes about famous or at least familiar figures like O. Henry, Lyle Saxon, William Faulkner, and, of course, Tennessee Williams. The highlights of the tour for me were the explanation of the role the petit Theatre and petit Salon played in the revival of the Quarter, and the story of Madame John’s Legacy.

It was interesting to see the tour “mechanics”-basically using the time to tell half a dozen stories, pointing out an interesting building or two while walking, building in a 20 minute break at a nice bar, and letting the city sell itself. It is not a lecture, but using the physical prompts to make the stories, true or not, real. I am really not interested in the exterior of a building where author x allegedly lost his virginity to a drunken sailor, but it is one way to structure a walk through the Quarter.

After the tour, I got a text from Chris, and tried to get uptown. I tried to catch the bus, my usual way to the Irish Channel, but missed the noon bus and the next one wasn’t for an hour. As i waited, one of the Envie baristas stopped and chatted for a bit, but didn’t want to make the trek after a full shift. I called an Uber, which also took half an hour to arrive. As we got close to the parade route, traffic just stopped, and I bailed on Jackson well short of Magazine. This was my first Uptown parade, and I got stuck, twice, on the wrong side of police barricades walking against the flow of the parade, kind of like speed reading the parade. I’ve been Chicago-trained on the barricades, and am reluctant to cross them, even if my destination is on the other side of the police line. The rules here seem more relaxed, but I’d hate to spend time in the Orleans Parish jail. I caught a bouncing tennis ball throw, and ran into a black lab who looked like he really wanted it more than I did. A happy dog.

It took about half an hour of wending my way through the crowds to Tracey’s block party, which was packed like a frat party with college age kids and a smattering of older folks. I got a shot and a beer, and worked my way towards Parasol’s, figuring that is where the cool kids might be hanging out. I texted Chris a couple of times with no response, and was about to give up and take a long walk back to the neighborhood when he texted he was at a house party just above Parasol’s. I looked up, and Seker was on the balcony directly above. I got a wristband from the doorman, and joined the Touro Street Irregulars upstairs. Cecile, Judy, Jill, Seker, and his friend John were enjoying the hospitality. They had a full spread of New Orleans specialities, mini-muffulettas, red beans, a gumbo, and an open bar. This house was not on the parade route, so the crew moved on to another house party on Magazine and Jackson.

Cecile narrated the walk over, as this was the neighborhood she had grown up in, and stopped a few times as we walked to catch up with old friends, and ran into her sister. We ended up at a big party where they were serving crawfish and Popeye’s fried chicken and the sides. We popped in and out of the party and the parade route itself, enjoying the six or eight floats, and the Irish themed costuming. This was the end of the route, and the pipers and other bands seemed to have dropped out, with 10 hours of drinking enough to fell even a bagpiper, We picked up her car at the fancy apartment building her parents live in and drove back to the neighborhood.

I had a sandwich and a beer at the bar at Buffa’s, chatting with a guy who had grown up in Geneva and moved to Hawaii as a young adult. I guess I am not the only one who used the escape pod.

I’m peeling like a lizard, a good sign in the healing process, and looking forward to the Downtown Irish walking parade today and St. Joseph’s Day, with the possibility of Indians on Tuesday.

St. Patrick’s day turned out to be a good day fro photography. I walked the Quarter and Bourbon Street in the afternoon. There was a daytime parade in Metairie, Tracey’s was continuing the block party in the Irish Channel, and it was the Mardi Gras Indians’ Super Sunday in mid-city, so the crowd was a little thin. There were some tourists looking lost, and competing gangs of Spring Breakers in matching costumes on Bourbon, benign at 3 in the afternoon, but a real potential fro frat boy antics and fights as the evening wore on.

I took my camera out to lower Decatur for the Downtown Irish parade, staging up at Checkpoint Charlie with a good view out the window. I met some fun folks from Shreveport using it as their party base for the weekend, and had fun watching the parade. I followed it for a bit to Molly’s, and sat for while there. A good holiday!