This was the last full weekend for the season in New Orleans, and I tried to get a full bite. Thunderstorms threatened on and off, but Friday and Saturday were beautiful.

After some house chores on Friday, I took a walk through the Quarter. It is interesting to me how the crowd ebbs and flows over the course of a week, with not only the numbers of people but the nature of them changing. Today it was bridal party weekend, apparently, with roving bachelor and bachelorette parties competing for attention, meaning that there were a lot of 30 something folks in groups of 8 or 10 reliving college days and mannerisms. De gustibus, I suppose, but both men and women were buying drinks for folks freely at the bars they took over the day. I hope they were tipping well.

I had an excellent old fashioned at Tujague’s with Melissa and a foodie tour group not quite understanding that a brandy alexander has a fair amount of liquor in it. I wandered from there to Checkpoint Charlies on the hot day for a shot and a beer in a place too scary for all but the most intrepid tourists. I sat with Chris on his porch for a while talking through the block party, and then we went to the R-Bar for a couple of games of pool. I took a small break, and then off the Buffa’s to watch the Cubs and to improperly use the ATM. I must have guessed the wrong numbers in the dark, and was locked out temporarily.

i went to dba for the late show, the Soul Rebels who were playing with a traveling group from Cuba called CIMA. It was really fun to hear the more modern brass band playing some songs with a rumba beat, and others with their rapper. It looked like there were 20 people up on the little dba stage, and they were all bringing it. The eclectic music cleared out the folks not there for the music after a few songs, and it got better and better. There was a $15 cover, high for Frenchmen Street, but the bartender comped me two glasses of whiskey as a familiar face, so it came out in my favor. It is good to have friends. It was late when the band stoped playing, but I was still pumped from the music so sat in Checkpoint Charlie listening to a loud rock band for a bit. Loud was good.

Saturday was a slow start, but I took an early afternoon stroll to Harry’s Corner, where I sat next to two hilarious Scotsmen who were bantering with Beverly across the bar in almost incomprehensible English. It would take a bit to get used to that dialect. I instantly had two best friends, who were busy buying drinks and attracting a crowd with their storytelling and rude jokes. I was saved by the bell before they bought more than one round by Seker calling to ask for help with the oysters at the block party, or Touro Street Armadillo Festival. I flashbacked a little to Northwestern’s springtime Armadillo Days, but in a good way. I saw some good bands on that long gone piece of lakefront.

Chris had purchased 4 small sacks of oysters, which is how they do it here, looking like 20 dozen or maybe more. He bought half small and half large, and the large ones were huge, looking like a quarter pound of oyster each. They were dredged wild oysters, so had a little more variation in shape than the farmed oysters of SE Alaska, and were covered in dirt that had to be washed off. They had been soaking in clean water for a few hours, and did not have dirt inside. Chris had hired a local barback to shuck oysters, and it was immediately apparent that he had never shucked an oyster before. I demonstrated on a couple, but refused to be Tom Sawyered into shucking 20 dozen oysters. It was kinda of funny to watch somebody trying to learn a new skill, having the right tools and instruction, and all kinds of time to practice, and just giving up. He would have learned after the first 10 dozen or so, but eagerly gave up the knife to a guest from Lafayette who was more than willing to show off his skills. I did end up hosing them off and toting shucked oysters across the street and shells back. 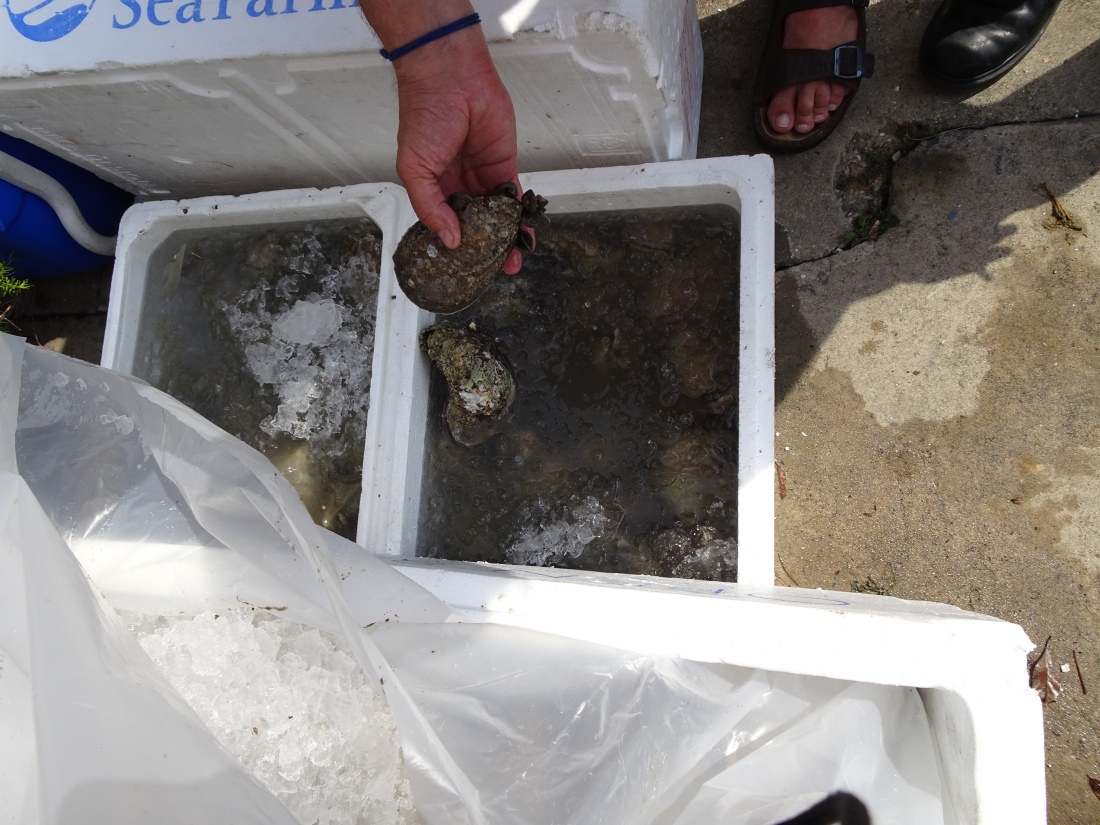 Mike was in charge of the grill, and cooked the large ones the Drago’s way and with Gouda cheese and bacon. We will have to try that at home. It was nice to have someone else in charge of the cooking. Ellen and Judy set up their house to eat, and we invited passersby to join us. A unusually cool group of bachelor partners were looking for a place to eat the 10 pounds of crawfish they had bought at Cajun Seafood, and shared by dumping it out on the table. Often those groups are insular and not interested in talking with folks, but these guys as well as several visiting couples mixed right in to the neighborhood party. It was good to see visitors getting a full on NOLA experience. Oysters three ways, crawfish, muffulettas, and lots of sweets made for a great party. 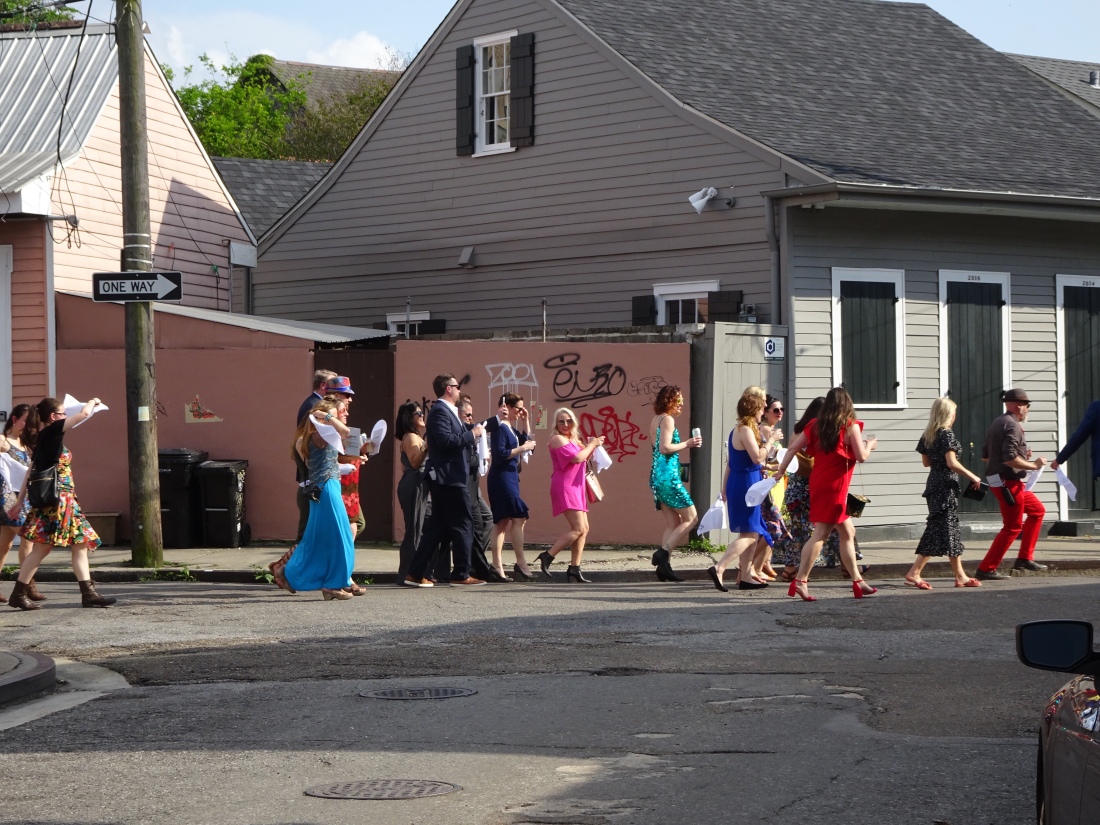 The whole day was filled with music, with two separate second lines walking by on Royal Street, musicians walking down the street, and good music being played on the stereo. The topper was the Riverbend Ramblers. They are two members of four-person band, the Lost Bayou Ramblers, who won a Grammy last year for roots music, and they set up and played on the porch. They played accordion and guitar, and sang in Cajun French as people danced in the street. It was truly excellent, and a great way to celebrate with friends. 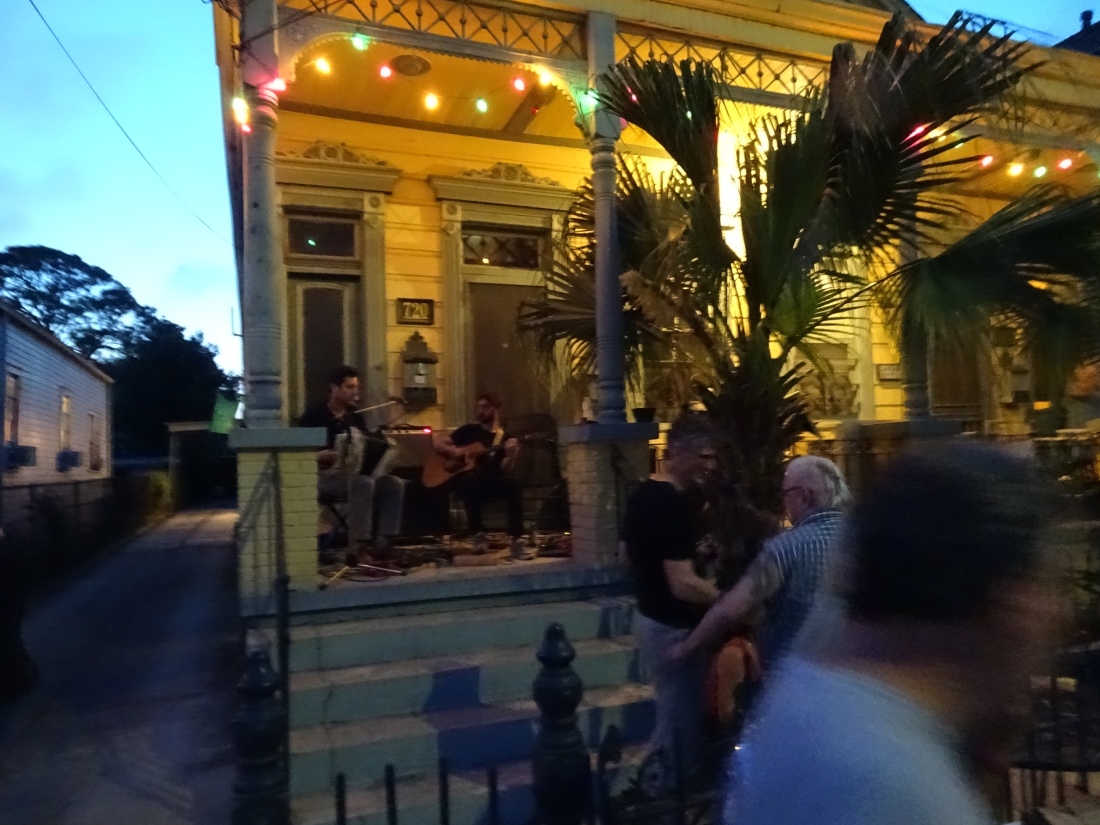 Cecile missed the party, doing house business in Bay St. Louis, but Chris inducted himself as a native New Orleanian on his ten year anniversary of being in the city, and I got presented with a Team Touro pin.

On Sunday, I watched the Cubs game at the Great American Sports Saloon with Chris over a sandwich and a beer. I intended to go to the late show at dba to see the Iguanas, but the threatened thunderstorm passed over just as I was headed out. It takes a lot of energy to be a bon vivant, and I couldn’t summon enough to walk through a downpour to the 10 pm show, even on one of the last nights for live music for a while.

I’m ready for final packing and cleaning today, planning to fit in a visit to the newly renovated Historic New Orleans Collection museum and an appetizer meal at the Hermès bar at Antoine’s for one last fancy meal before the travel day from hell Tuesday. I have an evening flight from New Orleans to LAX, midnight from LAX to Seattle, early morning from Seattle to Ketchikan, afternoon ferry to POW Wednesday. Door to door 30 hours or so, and I am glad it was a mileage ticket.

One thought on “Last Weekend”