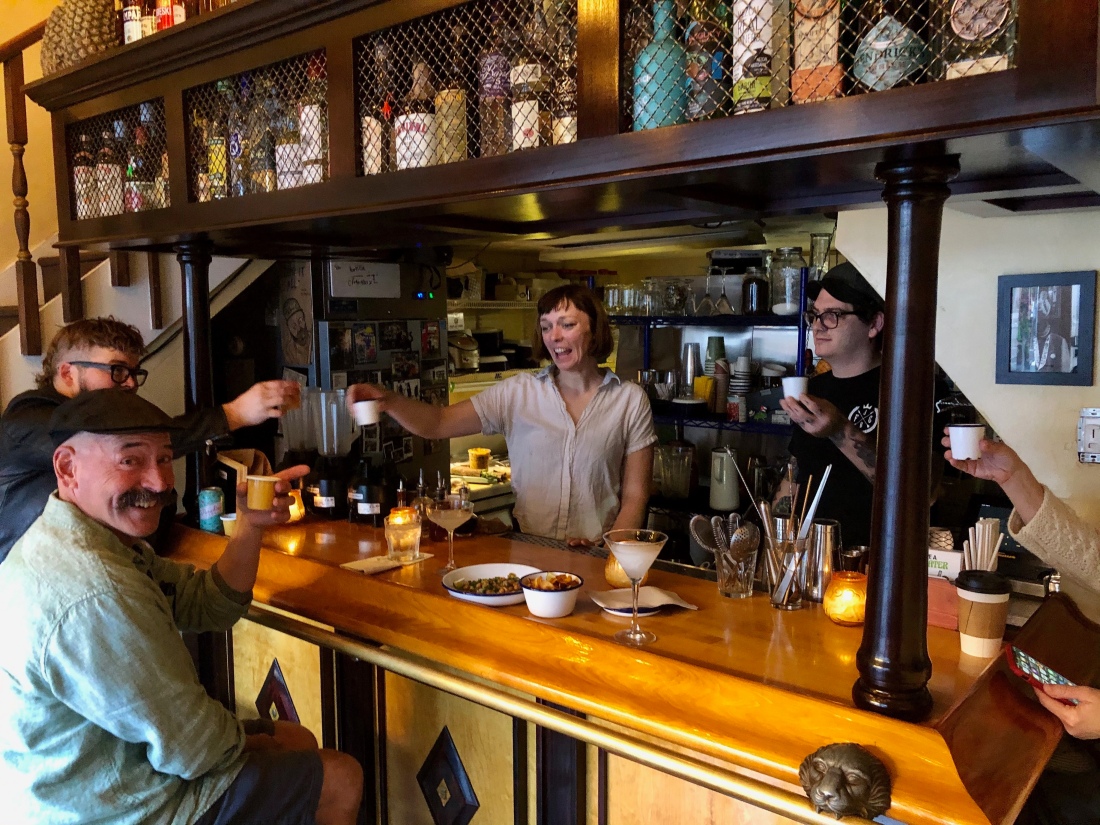 Victoria met up with her friends to enjoy the weekend. I went to the Treme Gumbo Fest at Armstrong Park, stopping along the way at a pop-up art sale at the Gallier House put on by a friend from the pool, Simon. There were a number of large format primitive style pieces, none of which caught my eye although aggressively priced($100 for 3 foot x 5 foot panels). The main figures were doll-style, like a raggedy Anne doll, surrounded by smaller sketches of buildings and lists of words scratched into the paint which was bright colors but not neon. They were interesting but I was not ready to throw one on the wall. I did not spend enough time looking at piles of charcoal sketches, mostly nudes and architecture, at $10 each. I bet there were some nuggets in those piles.

I walked up to the park, without art, and through the vendors to the music stages. One of the main stages was completely in shadow of the building, and the Congo Square stage was in the sun. I took a bunch of photos at the sunny stage, and ran into Ken and Cyndi from the neighborhood. I saw a good band of younger musicians who I did not recognize, and then the Corey Henry Treme Sextet. They were great, and he is a former Rebirth band member. James Andrews and his band were in the audience with us for that set. The bands were great, and these festivals are fun because the late night guys, the musicians, are out with their extended families during the day. Little kids are invited up to dance or perform on stage, and a pre-teen trombonist pulled a respectable solo in front of the festival crowd.

I took a break from standing and photographing on Bourbon Street, and ran into a small second line along with a bunch of college football fans. It appears that Johnnie White’s is indeed sold, and the complex of four businesses on the block will be broken up, with the Original on St. Peter the only one remaining as-is. I know a lot of the people who work at the other three, and it will be disruptive. It is interesting to me that New Orleans has such turnover. As a tourist, given the level of decrepitude and pride that people take in things being old, it seems like Johnny White’s or Tujague’s had been there forever and would continue forever, but they are businesses that grow and change. Johnny White’s took over from a fancier nightclub in the same location about 30 years ago, and catered to the local or tourist looking for a comfortable dive bar without the edge of some of the neighborhood joints. Another place or two will probably spring up to cater to that crowd, although the trend seems to be towards the more profitable daiquiri stands. Hopefully the new owners of the buildings have a better plan in mind than a Willie’s Chicken Shack.

I returned to the park for the last part of Big Sam Funky Nation’s set and Kermit Ruffin’s Barbecue Swingers, both fun. It was good to be able to take some photos of some of my favorite musicians. I met with Victoria and her friends at the Apple Barrel, listening for a set with Billingsley and his crew, always entertaining, and a nightcap at the Brasserie Marigny. The band seemed awfully good, and it turns out they were the Squirrel Nut Zippers minus Dr. Sick, their frontman. I’ll bet they are recording in the neighborhood again.

Sunday was a football on the porch day, with another Saints win, and James smoking hot dogs all morning for slaw dogs. Good hot dogs, but hot dogs none the less. I met Ken and Cyndi at Lafitte’s and had a good conversation before we went up to try to see the Indians at the festival. We had just missed the “battle” of three tribes, but Bo Dolis, Jr., and the Wild Magnolias were just about to come on stage. I got some good photos of their performance before the light went away.

On Monday, I walked through the Bywater with Victoria, toured Dr. Bob’s, on to Elizabeth’s for brunch, excellent as always, and then a walk back along the river to the Quarter. Victoria got a massage as I worked on photo editing in Molly’s being entertained by the bartender who is a stand-up comic. He wasn’t telling jokes so much as provoking, in a gentle way, difficult conversation from the five or six folks at the bar. He and I talked about race and policing and were joined by a couple of other people at the bar, and then he steered the conversation to sex and porn, getting a jack mormon 30 something year old woman to discuss her experiences. A man with talent. I got Victoria to try a frozen Irish Coffee with peanut butter whiskey as a float, highly recommended, and we walked the tourist strip and French Market. After a break we reconvened and went to the John Boutte show at dba. I love that show, but don’t want to go to the well too many times. We ended the night with bar food at 13, where we got good bartender karma for putting up with a very drunk patron who was absolutely fascinated with the fact that we both had shaved heads and I was wearing a hat that made me resemble Walter White from Breaking Bad. I hope Vic had a good experience despite the crazy level of drunkenness.

I fully intended to hang around in the sun and do house chores on Tuesday, but my buddy Chris texted that he took the afternoon off. We walked through the Quarter, with no particular mission but staying in the sun. He bought a good cigar, and we ended up at Manolito, with just Lily and the other staff playing a game she calls Blender or Blunder. One of the staff brings in an ingredient and she makes a blender drink incorporating it. Sometimes it works, sometimes not. The chef brought in spam, and it really does not work as a daiquiri ingredient. It was more than a little nauseating. No amount of bartender magic was gonna save that one. We went to the R Bar on the way home, and I met Michael Wilder, the musician and archeologist from the neighborhood, hanging out with the dogs and smokers right over the “Hank was here 1955” graffiti. We had a good chat and it was good to see him again.

Another warm and sunny day, and perhaps today I will get some house chores done.