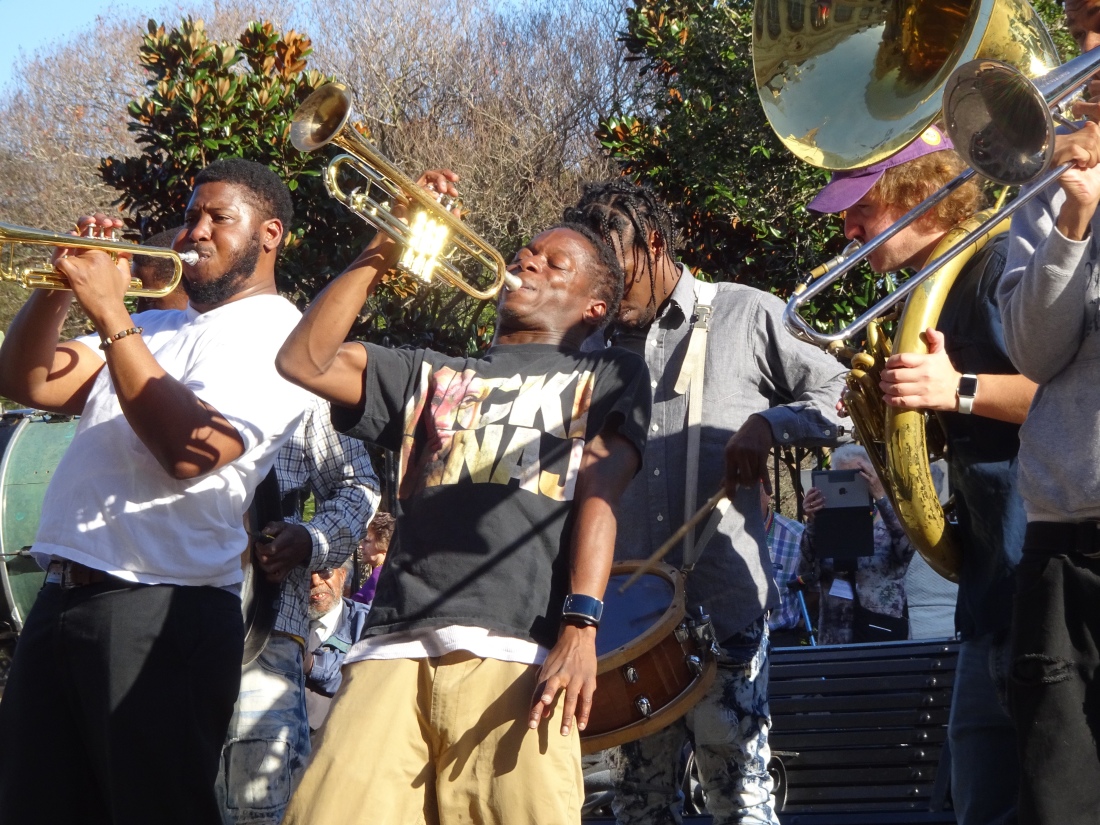 Working on the tattoo recovery, not a bad one this time, but it does sap the energy to have that much healing going on. Another day off from pushups and such so long as it is still visibly swollen. I walked thorough the Quarter, half-heartedly looking for Christmas decorations and a hide a key for the outer gate. I’m convinced that I will lock myself out one day and don’t want to deal with the realtor box.

I struck out on both counts, but it was a warm sunny day, preternaturally quiet. I had a beer and a chat with Jill at the Hole in the Wall, knowing they will be gone next month. I like the stories from the bartenders who have been on the street for years, usually nothing profound or focused, but a connection to the old New Orleans from an interesting perspective.

After a quick stop at Walgreens, I sat in the sun for minute in front of the Cabildo and listened to a few songs from a brass band. The light was right, and I took a couple of photos to add to the street music series. From there, it was Muriel’s to make a holiday reservation, and I sat at the back bar, intending to check out the Seance Room upstairs. Seker texted that he was out and about, and he met me at the bar having run into Pam and Paul from the neighborhood at the door. We talked story, and I was reminded that Paul had worked for Dan Blanchard as a boat captain for part of a season and had fond memories of Southeast Alaska. He also reminded me I had promised him salmon, which I can do.

Seker and I continued on to the gyro place on St. Peter, and then on to Molly’s and the R-Bar. It was a good mellow day.

I walked along the river in the sun after coffee, and then back through the Quarter. There was a saxophone player busking/practicing right at the stairs. I have seen him before, and it was good to listen to him run through the bossa nova songbook. I didn’t have change to tip him so I didn’t get photos, but the steamboat was photogenic. I returned to find that Neighbor Dave had bought a gas grill, a good addition to the courtyard. I swept the leaves and took the old charcoal grill to the curb with the garbage, and it was gone in an hour. It is an oddly efficient system for disposing of usable junk, a cross between theft and recycle/reuse. It sure beats sending all that stuff to the dump.

I walked up to the Robert’s and stopped after making groceries at Kajun’s on St. Claude, one of the cornerstones of the neighborhood, established fairly soon before Katrina and a fixture during the storm recovery. The owner, Joanne, was featured in a book called Nine Lives, about people who had survived the storm. She sat next to me at the bar and we had a short conversation about the neighborhood, but it was a little odd to know her story(she is a trans woman) as least as presented by a journalist, and to have her know nothing about me. The bar itself is a self-consciously divey space, concrete floors and no furniture other than the bar, gambling machines, a laundromat attached, and a small stage for burlesque and karaoke. Joanne is famous for inclusiveness and for helping the down and outers. I’m glad I walked in.

Later in the day I went to Manolito for a happy hour daiquiri and was the only non-employee in the joint. It was fun getting to know those folks better, and I hope they have a better weekend. It was a slow week for everyone I talked to, but it is a football weekend culminating in the Saints-49ers at the Dome.

The week has been a little disorienting after the busy holiday and the long tat session, a little fever reaction to the tat, and a salad, coffee, and beer diet. It did not help at all to walk the Quarter at 85 degrees in December. There were women walking Bourbon in lingerie at 2 pm, trying to attract business for their clubs and bachorlette parties disrobing in groups trying to match the spirit of the strippers. I sat in Hole in the Wall next to Nicolette, a 50 year old woman who sports glued on vampire fangs and surgically modified elf ears. One day I will get a picture of her, but want to be more on my game to get that personal with her. All in all, together disorienting afternoon was not a great way to try to get a handle on things.

I went to see Shawn Williams for a set of rockabilly at Cafe Negril, and then home for a break. I read a little bit, intending to walk Frenchmen later in the evening for a snack and a set of music but a hard rain fell for about an hour draining any motivation to walk the street. I braved the elements to get a burger at Buffa’s, running the gauntlet of begging guys out front. A tourist sitting next to me asked for my leftovers to give to the guys out front, and handed over the leftover burger and cold fries for which he got yelled at by the unwashed. I try to tip the street musicians who I listen to or photograph, and give leftover food to the travelers on Decatur, but try not to encourage them in my neighborhood. Aggressive panhandling turns to mugging in a heartbeat.

Boon asked me for my burger card, which I had never heard of. I feel like I graduated to being a true local when he gave me the frequent flier card and punched a half a dozen holes in it. I’m now an official card carrying regular at Buffa’s. I stuck around for a partial set from a outlaw country type singer songwriter in the back room. The slide guitar player was excellent, but a half dozen songs was enough of that genre for the evening.

I took a walk in the morning to a couple of garage/antique sales in the Bywater, but the junk to treasure ratio was pretty high, and there were no perfect mid-century modern chairs, piano benches, or congas on offer.