I tried to mellow out over the weekend by walking the Quarter and Marigny with my camera, perhaps not the best tattoo recovery plan, but enjoyable and I can pretend the extra steps constitute exercise. The weather was perfect, pushing 80 but not too hard.

On Saturday, I did a double loop, catching the morning quiet on Bourbon Street as I walked to Mary’s for pieces and parts and through the upper Quarter Christmas and grocery shopping at Rouses. I camped out for a bit at Jackson Square, and ran into a wedding second line, with half the band playing off the balcony at Tableau, and the other on the street. I’m guessing these folks, celebrating at the Petit Theatre, had a little pull in town because they blocked St. Peter for at least a half hour, backing up traffic on Chartres all the way to Canal. Tourists who pay for a second line don’t get that kind of deference from the police.

I walked my groceries home, and took a short break before heading out again, this time with a mission to visit Meyer the Hatter and Courtney at the Little Bar, even though it meant crossing over into the American Sector. I am still a little confused about how the streets work, changing names and running off at oblique angles after you cross Canal, so I walked Bourbon Street from Lafitte’s to Canal, where it changes into St. Charles. I stopped at Johnnie White’s and visited with a laid off reporter from the Philadelphia Enquirer who was in town working on a freed lance story about the art world. An interesting fella, with the look of desperation I see in a lot of people my age who did not win the pension lottery. 35 years in journalism, starting just out of college, with a solid career, and then no more, not enough in the 401k and no health insurance, and no plan or sense that there is any opportunity even given a formidable set of skills.

I continued on to take photos of the Christmas decorations inside the Royal Sonesta, and saw a group of women in designer clothes, with perfect makeup and hair, wearing light-up Christmas bulbs they had bought from a street vendor. Upper Bourbon on a Saturday afternoon was crowded, and both too crazy and not crazy enough to be pleasant. I got across Canal, and went to the hat store, a Southern institution. The elder Meyers were in the shop, and it is one of those few remaining places where the inventory is huge and invisible without help. I shopped next to a man who seemed vaguely familiar who was shopping for a pork pie hat, and who I later found out was the actor who played Clay Phillips in the Wire. I bought an upscale Saints hat, a Stetson flat cap with a fleur-de-lis embroidered in the back. A suitable substitute for a ball cap in the city.

I went over to the Little Bar to see Courtney for the first time since I got back. She is doing great, recently engaged and apparently a lot happier and more together than I have ever seen her. From there, I wandered back into my orb, stopping at the Chart Room and seeing Chris the neighbor and Tracy at the bar, and having a good conversation with a much richer denizen of the Quarter who was interested in Alaska stories.

I had a nice sandwich an a drink at Manolito. It is a funky place, and I arrived to find the bar empty except for the 5 staff. I was feeling guilty, and too much the object of attention, when two small groups came in and immediately filled the place.

Sunday I walked to the sound of a brass band, intercepting a second line on St. Claude near Elysian Fields and following for a bit into the Marigny. This was a 9th Ward group, and there were a few of the hard boys from the neighborhood trying to look cool along with the families dancing and having fun. The bikers were out, a different kind of bike culture, with a number of the three wheel slingshot type bikes, customized to the hilt, and a group of “9th Ward Riders” wearing leather vests and riding small, almost toy looking Japanese bikes. They didn’t look like outlaws, but they were riding security on the parade like Angels do on Klan rallies.

I walked through the Bywater and along the river, enjoying the afternoon, and ended with a burger at Turtle Bay, watching a little of the football game. Lower Decatur was crowded with the cruise ship demographic, jostling to find the best t-shirt shop. A good mellow weekend. 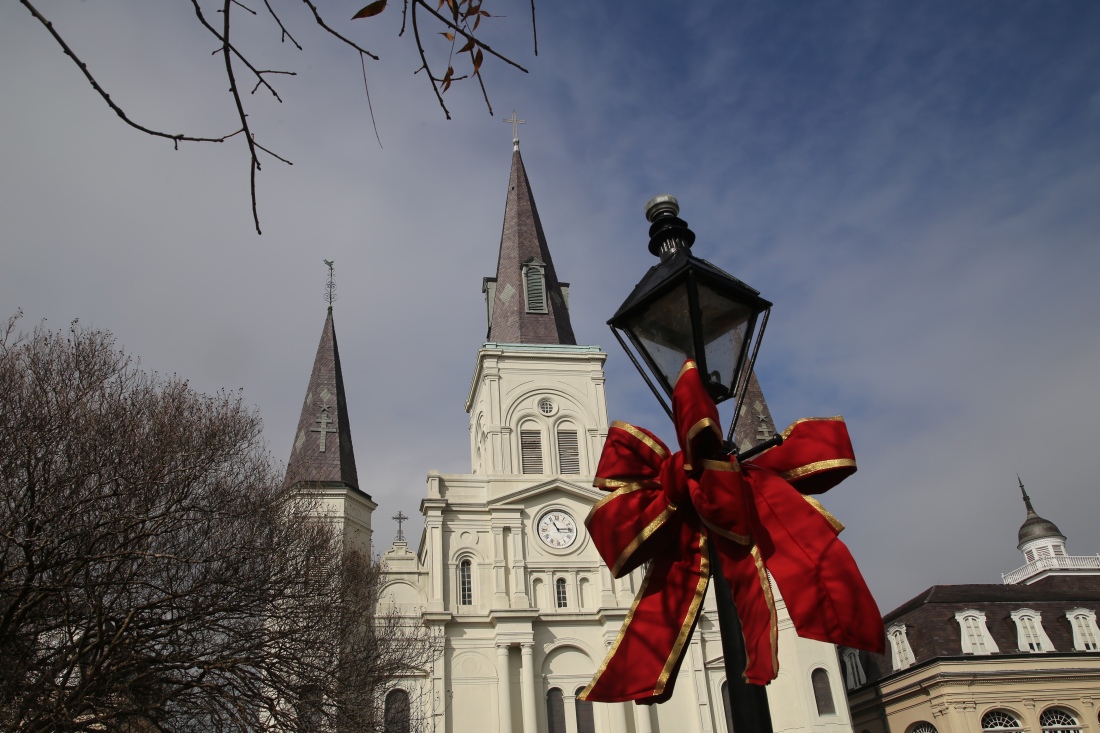