The Saints ended the season with a poorly played and disappointing game which left the neighborhood in a kind of funk. Things will get better as it is Twelfth Night, or 3 Kings Day, or Epiphany, the official end of Christmas and the beginning of Carnival which ends in six or seven weeks on Mardi Gras. No fear, though, because St. Patrick’s Day follows close on. The king cakes start and the Jeanne d’Arc parade is tonight, and there will be Carnival festivities throughout the season, not to mention the football national championship next weekend. the pressure is on for LSU now that the Saints are out of it.

Deanna was here for the longish Christmas break, and we packed in a lot, including a trip to Shreveport for Christmas itself. We had some excellent meals, trying out restaurants that we had not been to before. We had a Christmas meal at Muriel’s on Jackson Square, a New Year’s meal at Kingfish, neighborhood meals at Adolfo’s, Mona Lisa, Snug Harbor, and Three Muses, fancy cocktails and snacks at Manolito, Jewel of the South, and the Belle Époque, more casual stops at Em Trai, Royal Sushi, 13, Juan’s Flying Burrito, the Who Dat cafe, Croissant d’Or, Buffa’s, the French Market, and Envie. We made pretty good progress through our list of destination restaurants, but failed in crossing many off the list of ones that we would not want to go back to, instead starting to build another list of places to go for happy hour specials or to go with friends from out of town.

We saw good music just about every day, highlighted by sitting in the front row of tables for Walter “Wolfman” Washington, seeing Glen David Andrews and his brass band in a room slightly bigger than our living room and smaller than the chapter room at DU, John Boutte at dba, a modern/academic jazz set at Snug Harbor, and all of the street musicians. 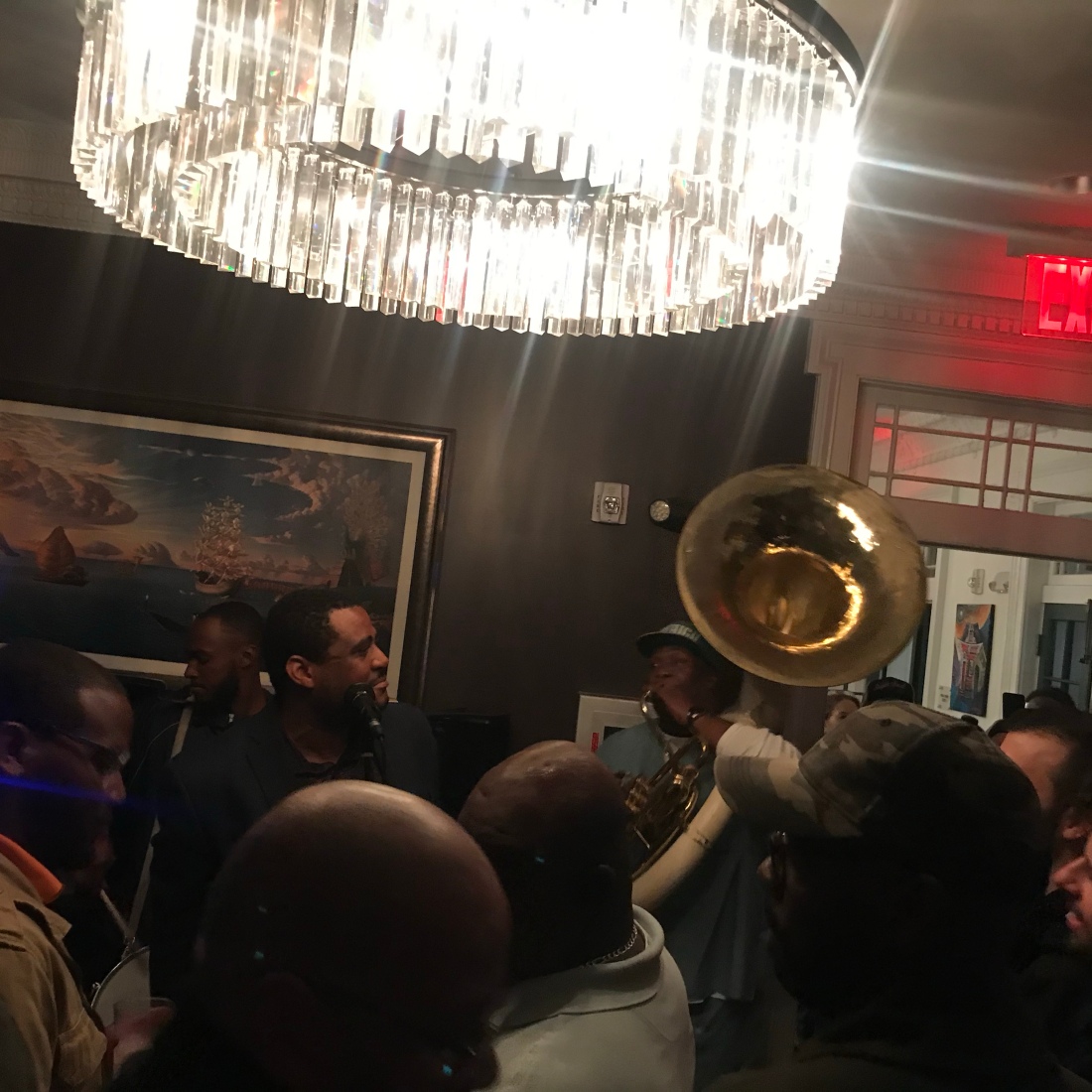 We walked the French Quarter daily, shopping our way through the galleries, antique stores, and junk shops. We commissioned some custom art from Simon on Magazine Street for the house in Craig, and bought a couple of nice chairs for our place in New Orleans. Simon, from France, was the King of the parade, and made a number of the signs people carried. It is fun to be part of a living culture.

We socialized a lot with friends and acquaintances in the neighborhood and our favorite bars, running into people we knew just about everywhere we went, even on the busy days. It was a good couple of weeks in the old city for the holidays.

No New Year’s resolutions, but I will be working on a new blog site featuring photos. It has been frustrating to not have a good way to show photography to folks who are interested other than social media. Hopefully this will be fun for people, and a way to share some work without being overwhelming, either to produce or to look at.

I apparently wore myself out after three weeks of fun, and was not in much of a mood for Carnival crowds, but did go out with a camera to the parade. It is one of my favorites, in the French Quarter and short but fun. It tells the story of Jeanne d’Arc with a couple of notable additions like the Flaming Heretics dance group dressed like devils or tormented souls and brass bands. A young Jeanne leads the parade dressed in gold on a horse, surrounded by footmen on hobbyhorses, and there are a series of floats and groups illustrating battles and her persecution by clergy, followed by her ascension to the accompaniment of a brass band playing “Hallelujah”. I’m not sure where the dragon or the stilt walkers come in to the story but the kids seem to like it. I had forgotten that people costume to attend the parade, so just being in the crowd is an event. The street clothes v. costume game gets really hard, and will only get harder as Carnival goes on. I forgot about the neighborhood Twelfth Night party, but it was probably just as well.

I made it back to the pool in Treme with a nice walk through the neighborhood and a good swim, but I am going to be sore after a couple of months off. Long slow distance for a while. 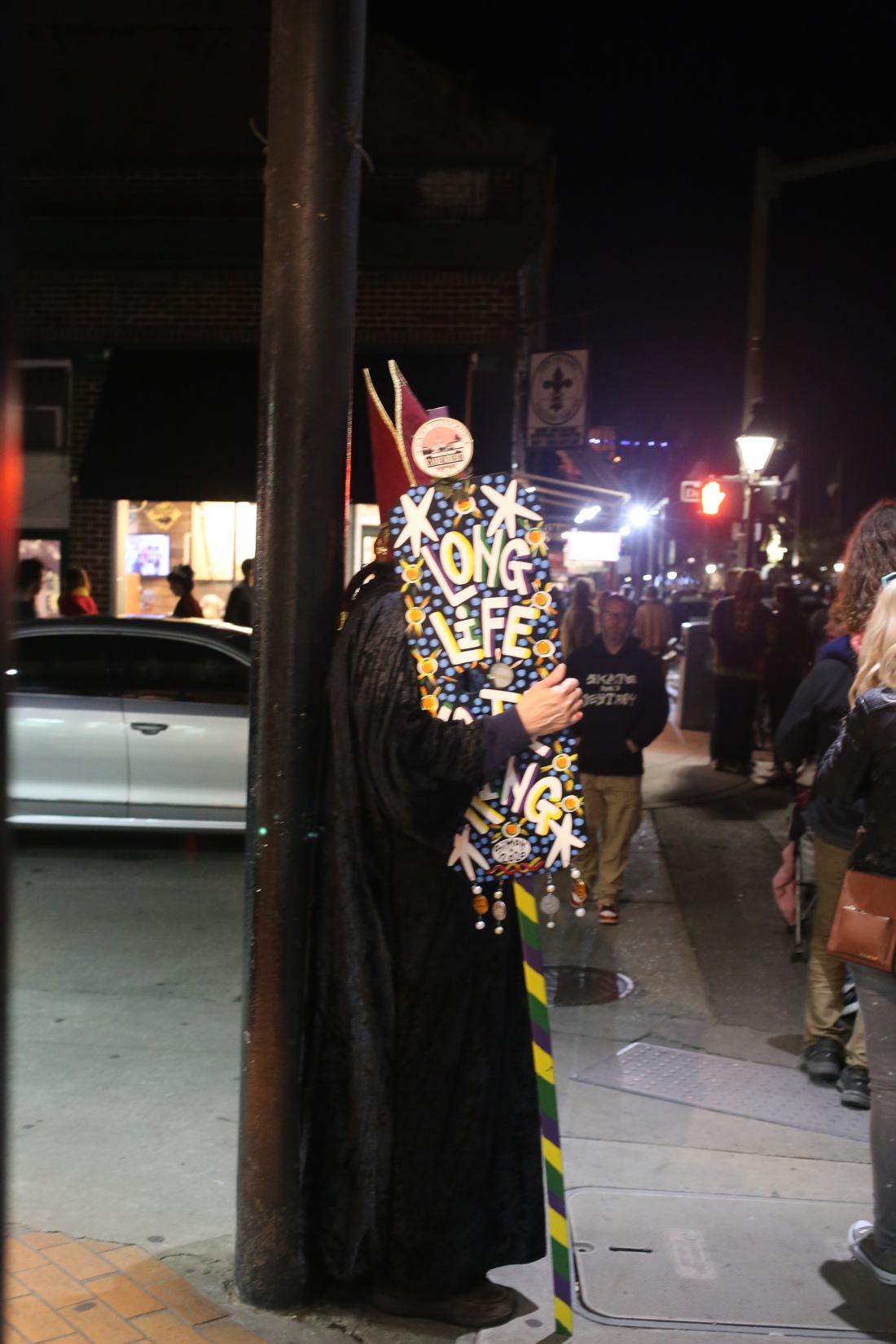