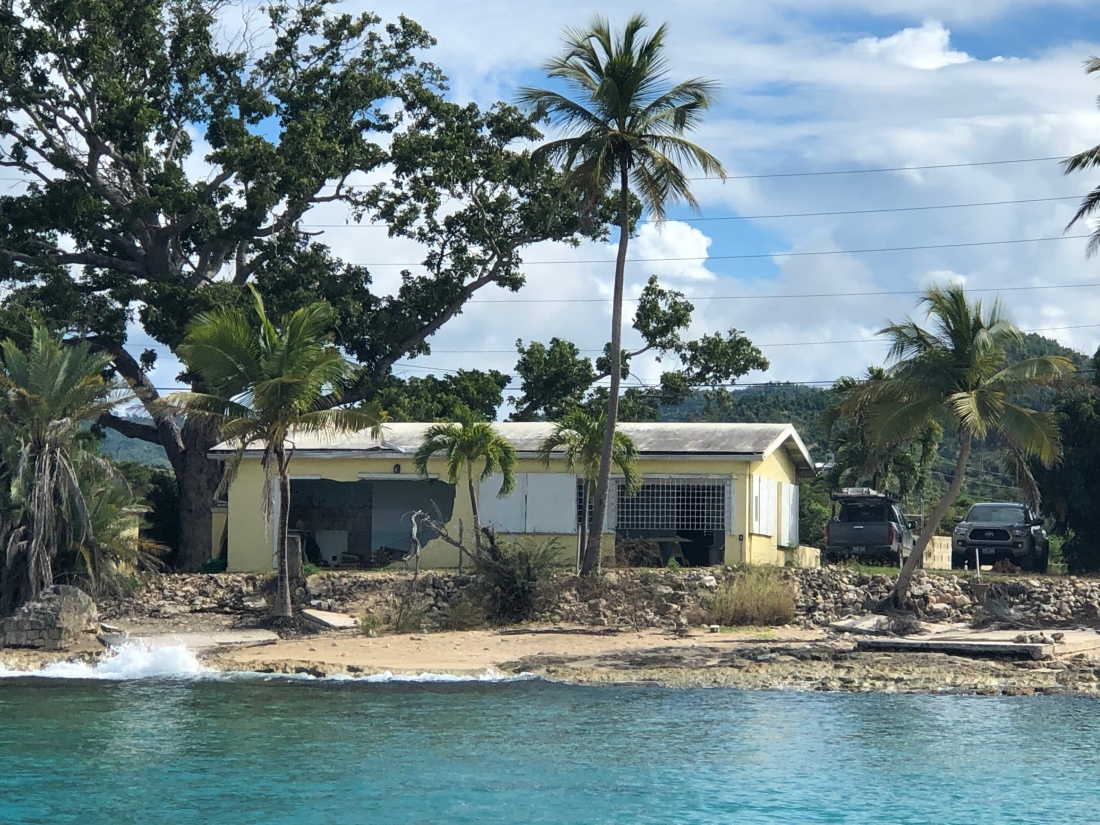 We anchored at Rainbow Beach, in front of the only true beach bar on this side of the island. Sadly, Freedom City Surf had not survived the hurricane. I had spent many hours there recovering from my hand injury three years ago, and the people had been kind and fun to hang around with. Tim was suffering from a sinus bleed, and Bill was able to call a doctor involved in sports medicine bleeding to get good advice. Tim took a day off diving, and luckily the bleed did not recur.

Dave, Bill and I dove Rainbow Reef, a sloping coral field just off the beach. There were huge branching corals that we had not seen alive before on this trip. They were six or eight feet tall with individual branches eight inches in diameter, clustered in groups ten feet wide. We had seen remnants of this type of coral, looking like fallen tree trunks, at other sites. It was exciting to see them full of mature reef fish and other critters. The intent for this dive was to do a nice shallow reef dive, but it was so clear and warm that when we looked at our gauges we had descended to 70 feet, and could clearly see the surface.

We moved the boat over to the pier, joining ten boats at anchor, and watching the dive shop boats move on and off the dock. The pier is long, built for a major cruise ship to tie up alongside, and wide, supported by rows of three pillars that extend from the shore to 100 feet of water. We tied the dinghy off to one of the pillars towards the end of the dock, descended, and swam the length of the pier. Each of the pillars is encrusted with sponges, corals, tube worms of many colors, with a bright red sponge catching the eye. There are piles of debris under the pier that provide shelter and structure for clouds of fish. This is the home of sea horses, and we hunted for them. I’m glad I don’t make a living doing that.

We dropped right into a school of Sergeant Majors which provided a convenient marker for where we had left the skiff. We saw a short-armed octopus, and were able to watch it work through a series of colors and textures as it moved from a purple coral, over white sand, and on to a dead black and white coral rock. It’s skin changed from purple and lumpy, to white and smooth, to black and white with square crosshatching as it tried desperately to hide from us. Nearby were cuttlefish, a close relative, swimming in the open water. There were large barracuda swimming along with us, and we worked right into a cloud of silvery fish about a foot long, swimming in unison and somehow staying just out of reach as we swam with the school. This was a shallow dive, starting at 40 feet and working up to 20 or so as we swam towards shore, and the water and air temps were the same 80 degrees. Nonetheless, it was relaxing and fascinating enough that it became my longest dive ever at 75 minutes, and I came out cold, and glad I had a warm fuzzy back at the boat.

The sun quickly solved the shivering, and we began to plan the next day’s dive, thinking that it was time to dive the Wall at Cane Bay. We called and surfed trying to find a rental car, and there was not one to be found on St. Croix. It was frustrating, as one of the fun things about the island is the shore side activities-visiting old Christiansted, the Cruzan distillery, the jungle bar, and seeing the sugar plantation heritage. This is one of the vestiges of the hurricane—St. Croix wants tourists and independent travelers, but the support systems needed are not quite back yet.

We decided to go into town and see if there wer other ways to do this, and walked past a new resort under construction, the Fred, that was holding a fundraiser for the local animal welfare group. We jumped right in and got to meet a bunch of locals while enjoying the view from the fancy resort. 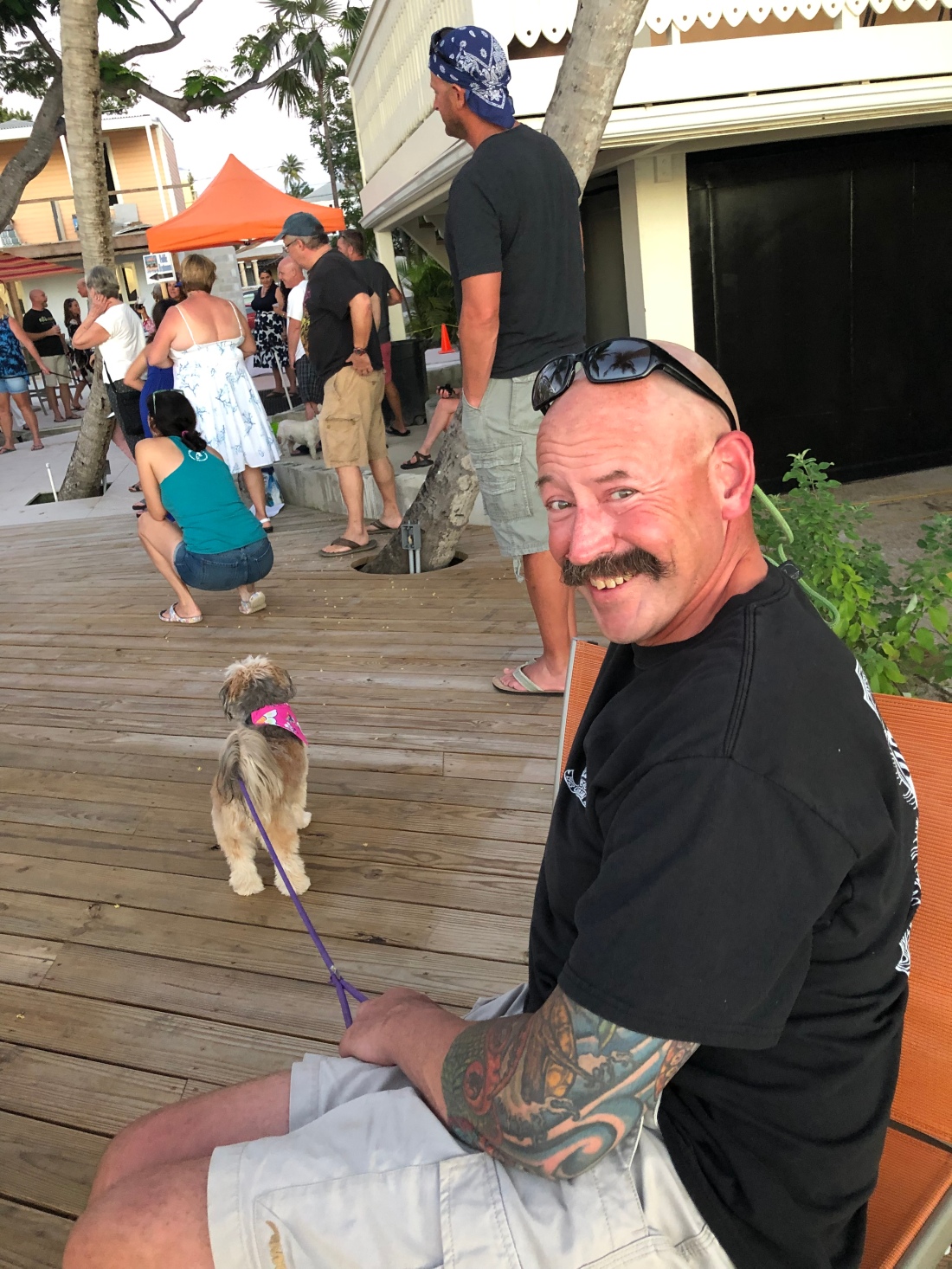 We moved on to a bar closer to the boat, for excellent flatbread style pizza—English Stilton cheese and Granny Smith apples, goat cheese and prosciutto—and pool. One of the women beating Dave and Tim at pool had a car key dangling from her belt, so i asked her how to get a ride to Cane Bay. She pointed to her boyfriend at the end of the bar and said talk to that guy. I went over and met Paul, who is a construction guy doing hurricane reconstruction. He has a pickup truck, and was planning to go to that side of the island anyway. He offered to give us a ride over in the morning, leaving it up to us to find our way back.

Bar talk being what it is, we were all pleasantly surprised when he met us at the dock as scheduled in the morning. We threw our gear in the back of the truck, and rode in the back across the island. We got the full jungle tour from the open bed, and got to Cane Bay. Paul refused money even for gas, and it looks like we all owe the universe one. The dive shop was extraordinarily friendly, bending over backwards to make our dive a good one even though we were only renting air from them. The dive is a walk across the road, a surf entry(low waves on this day), a swim of 200 yards or so, and a drop into 40 feet. The reef is coral canyons that run perpendicular to the beach, and end abruptly looking over 3000 feet of deep blue water. We swam down to 100 feet or so, and then worked our way along the wall. A shark joined us from the depths, paralleling us for longer than is comfortable. We had a nice easy swim out, and a great brunch at the Cane Bar to celebrate Dave’s last St. Croix dive. We broke down and had the dive shop folks call us a taxi to get back to Fredricksted. 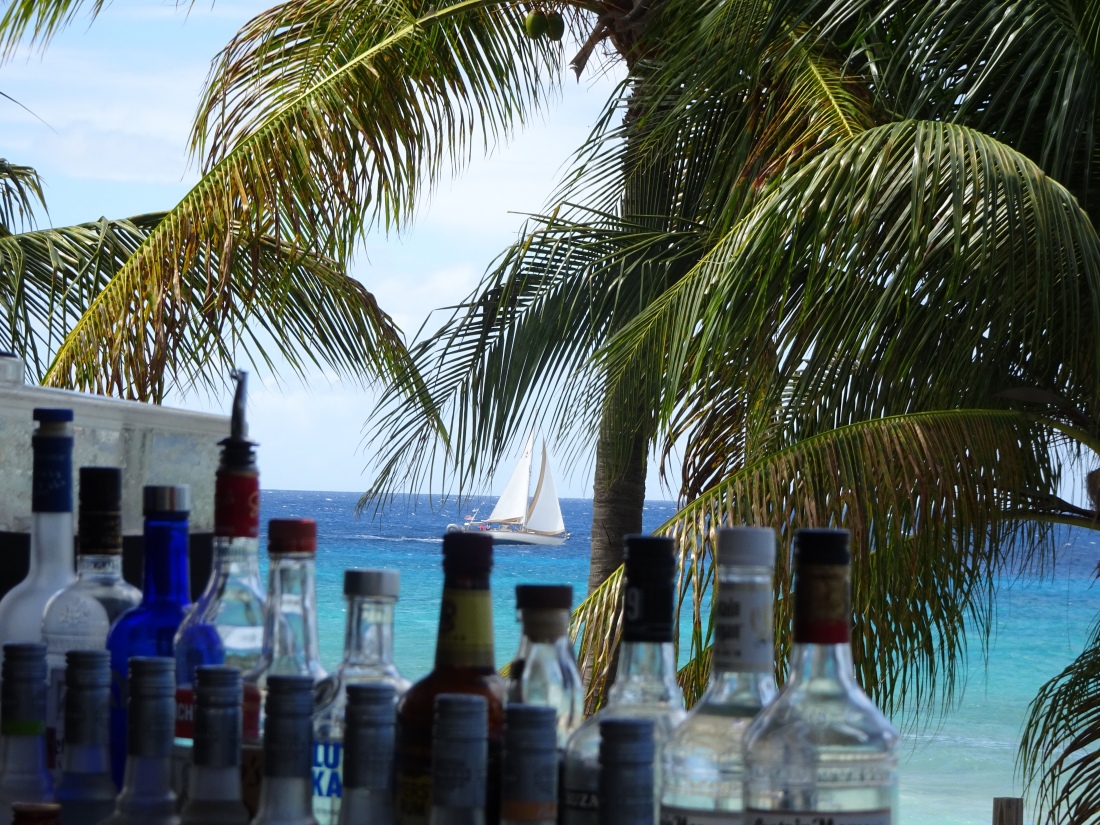 We got Dave to the airport the next day, and did some chores-fuel and laundry-as we prepped for a night dive on the pier, hoping for that seahorse. 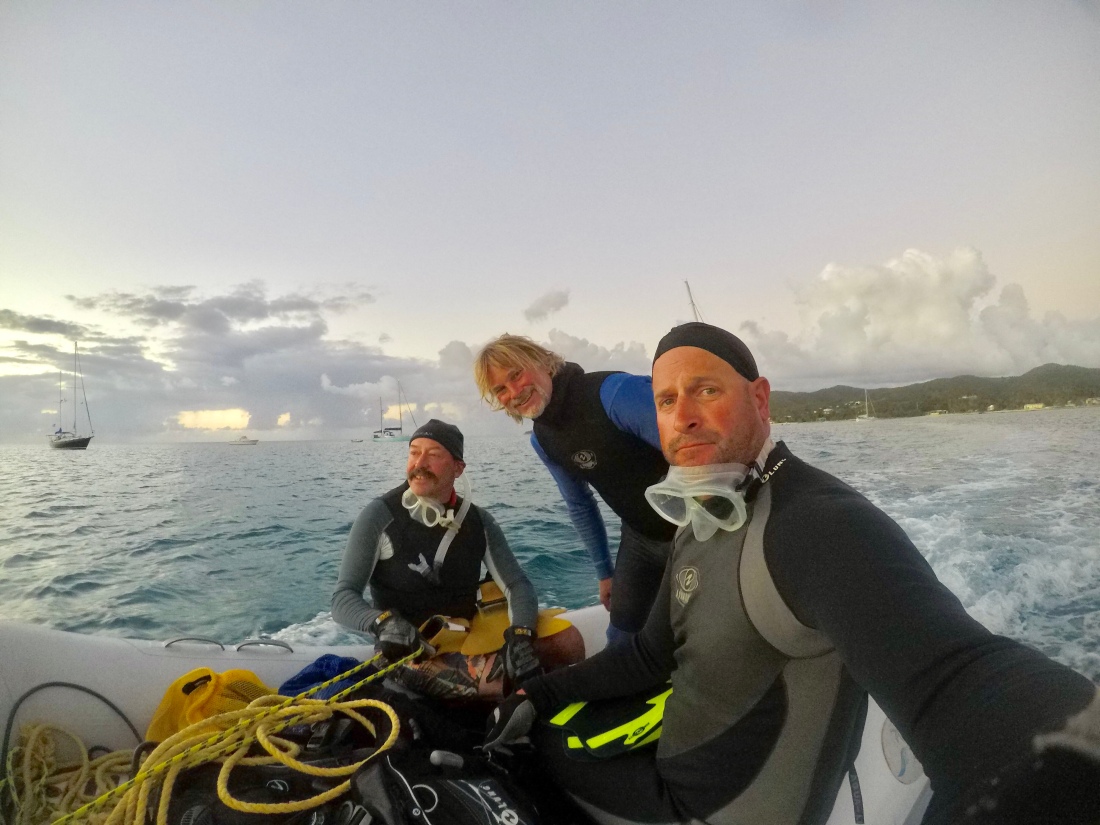 We didn’t find seahorses, but did swim with a school of five foot tarpon as they cruised the edge of the pier. We were glad once again to be the biggest swimmers under the dock. The colors of the encrusted pillars were enhanced by the dive lights, but it was a little disconcerting to meet two groups of other divers in the dark. A little confusing to keep track of our guys, and disconcerting to have a crowd under water. 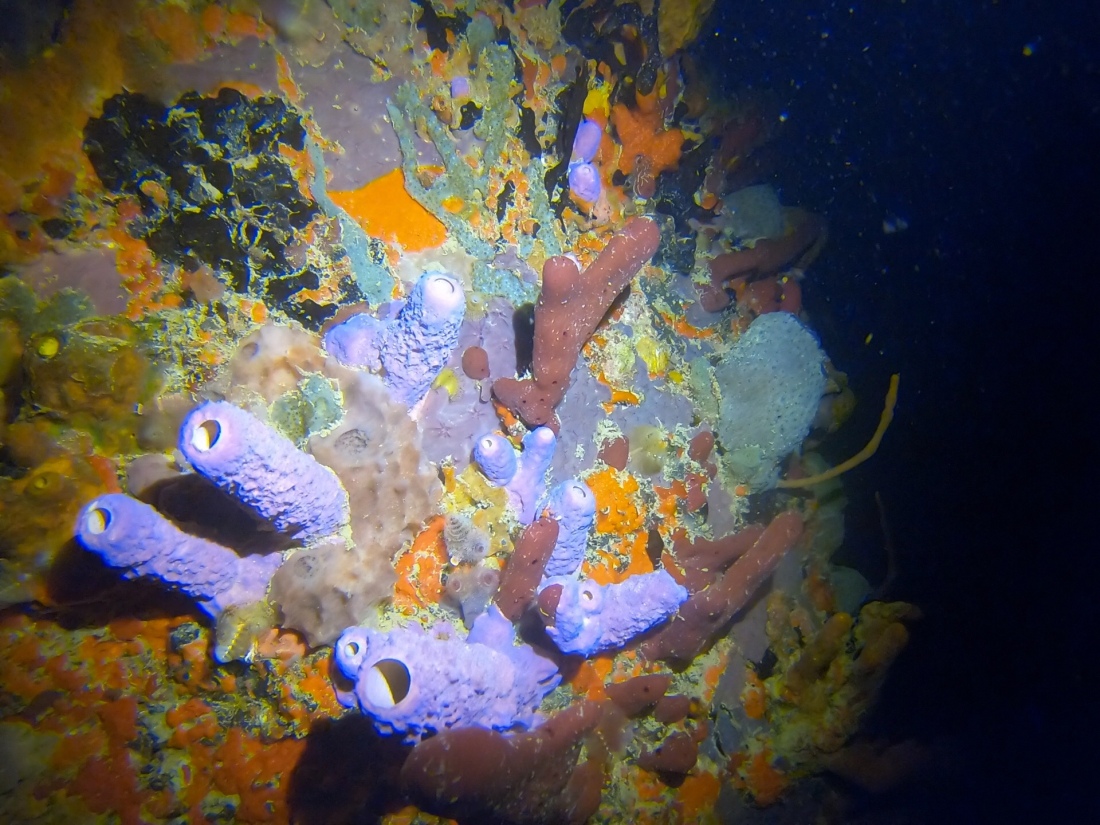 We moved the boat in the morning back to Rainbow, and dove Rainbow Reef, this time with Tim. We enjoyed the corals and excellent visibility, and saw a large green moray eel and our first spotted eagle ray of the trip. We had seen a number of shovel nose rays and other stingrays wiring the bottom, but the eagle rays are the big free swimmers that look like they are flying through the water. 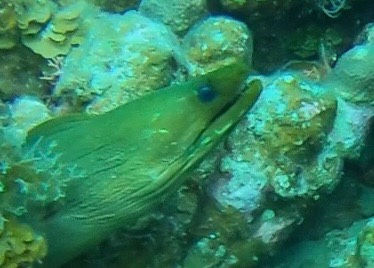 After an apparently clothing optional night at the beach bar, we went out to the deep wreck in Butler Bay, the Rosario. The wreck is well preserved, and there are corals that we had not seen at shallower sites, including a feathery white coral inside the pilothouse of the boat. 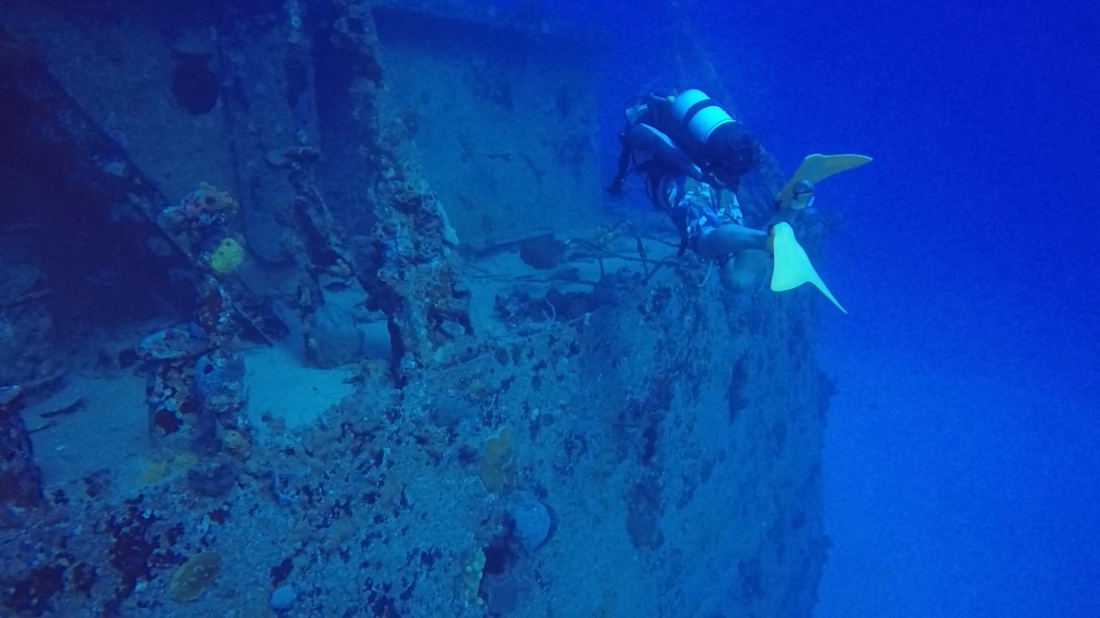 A big cruise ship came in, and the beaches filled up. The jet ski operator was running hard, and he had the flying jet out, using the power of the ski to lift a swimmer ten or fifteen feet out of the water and let him fly or dive back into the water. Tim and I took a cab across to Christiansted and walked the boardwalk for a little bit, but the transportation system cut our visit short.

The next day we dove a deep debris field called Armageddon, where the debris of the old cruise ship dock had been dumped over sand. The apocalyptic jumble created unusual angles and hide holes for all kinds of reef fish, and the depth, around 100 feet, dropping off to 600 let the big guys come up and check us out. Three reef sharks were interested in us, following us around throughout the dive. I imagined that they were hoping for one of us to spear a fish they could steal from us. 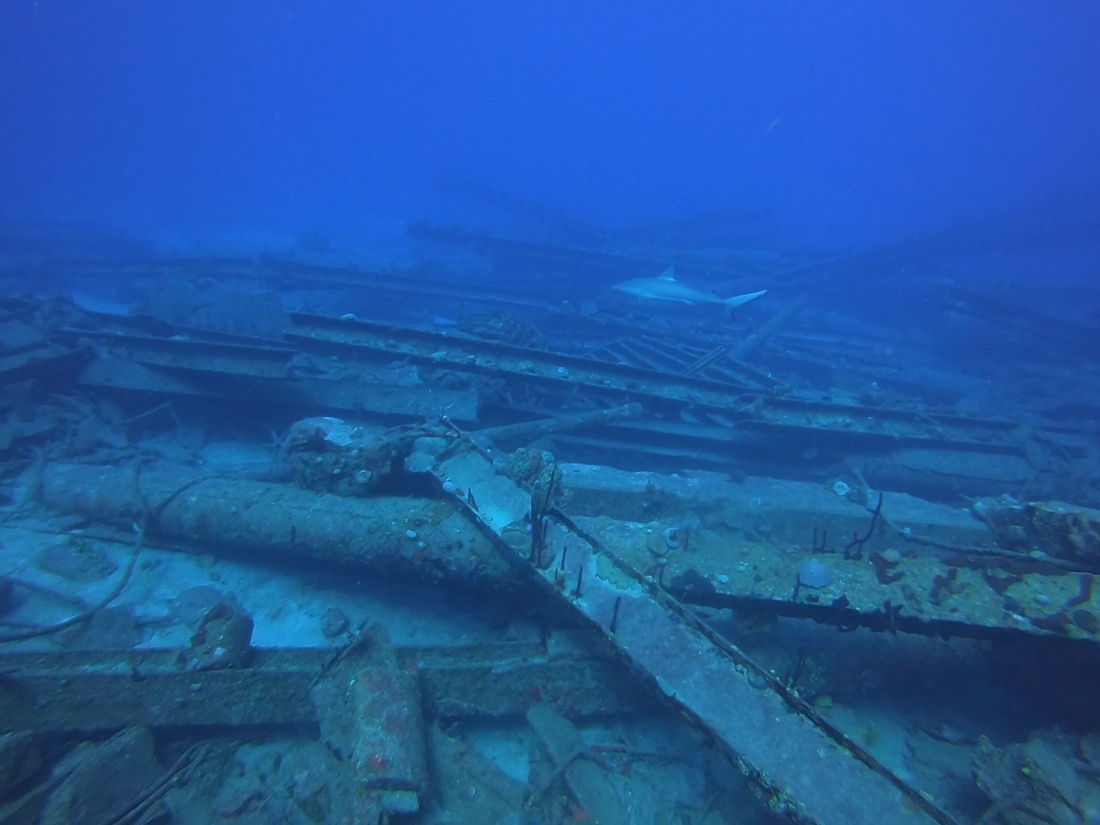 The next morning we woke to a pair of dolphins, one adult and one juvenile, cruising around the edge of the coral and sand hunting. It was Tim’s day to leave, so we packed up and took a tour of the Cruzan Distillery before dropping him at the airport. The boiling evaporation vats taking cane syrup into molasses smelled great, and the aging barrels in the warehouse were fun to see. I didn’t buy rum because the distribution network is so good that I have seen everything I saw at the distillery in local liquor stores.

My last dive of the trip was the Fredricksted pier with Bill. We were on the hunt for seahorses, and found every little bit of debris-bottle caps, buttons off shirts-but no seahorses. A beautiful dive in the afternoon sun, regardless.

While not “the most shameless debaucherie and disgusting immorality” that one would expect of true pirates, we had a great time pillaging and plundering St. Croix. Big adventure next time! 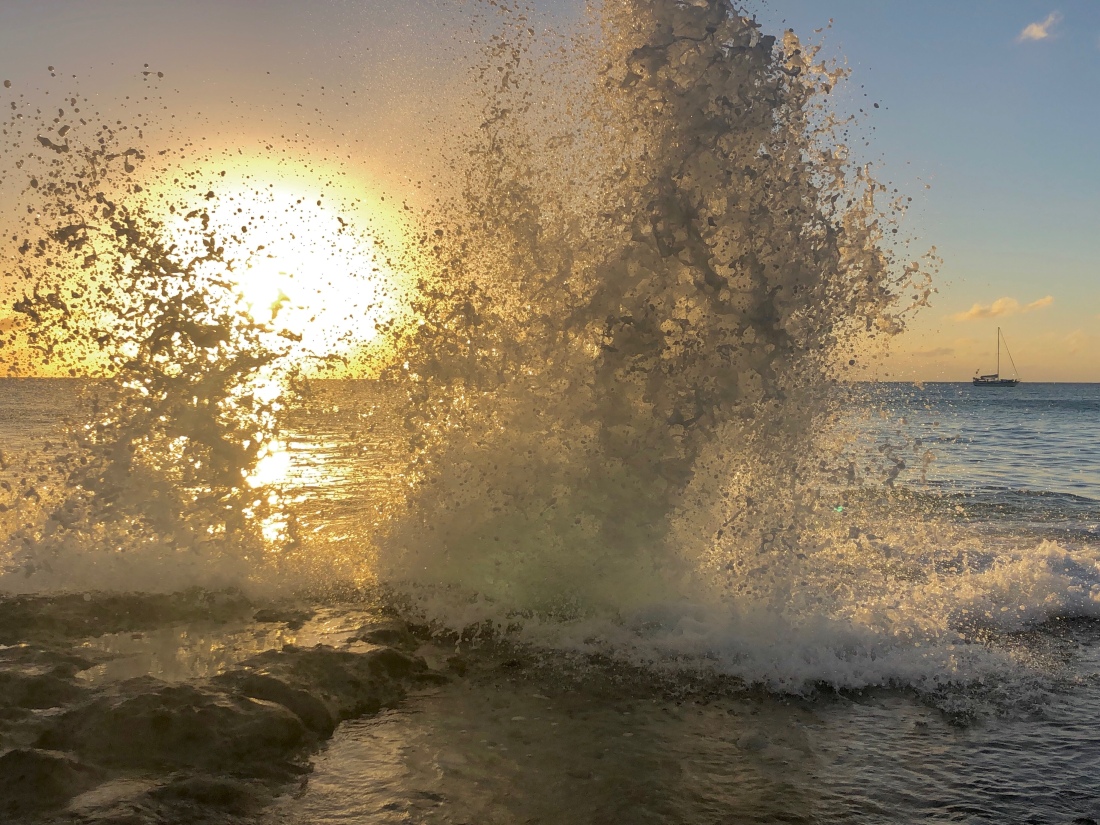